The Pilot Action of DOPPS-BirdLife Slovenia

The Pilot Action of DOPPS-BirdLife Slovenia

It’s all about our behaviour 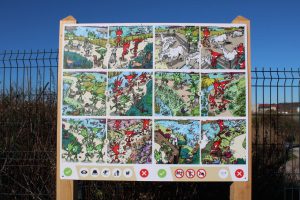 The prevention of visitation disturbance to protected animal species in Škocjanski zatok NR in Slovenia has been tackled in all phases of the nature reserve restoration and construction of the visitor facilities throughout the last two decades. However, some improper behaviours of the visitors remain, affecting the biodiversity, such as climbing the embankments, picking the plants, dog walking without lead, feeding of grazing animals, recreation at improper times etc. These behaviours are related to insufficient understanding of the needs and functions of sensitive nature reserve setting. Many visitors are not aware of the difference between an urban park and a nature reserve and thus expect the latter to be organised and managed such as a city park. But no … in nature reserve, nature comes first!

That’s why within the pilot action, DOPPS-BirdLife Slovenia, an NGO managing this state-owned nature reserve and IMPRECO project partner, decided to test new management measures and approaches with the aim to diminish the visitation pressures to ecosystems and their services. We focused on improving of the undestanding of nature preservation and its ecosystem services by the visitors, which are important to them but at the same time raise some limitations, which they have to learn to observe and respect. Dull legislation was translated to funny and vivid language of comic strip and life interpretation with 250 visitors tackled before the implementation of other pilot action activities and 350 more to be reached before the end of the project to test the success of the pilot action as a whole. 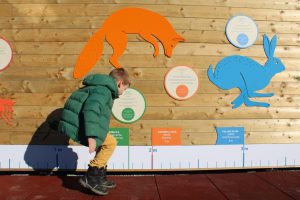 The improval of understanding is supported by improved nature experience of the visitors. That’s why we designed some didactic games and tools, such as bird memory cards with bird pairs and revolvable cubes with methamorphosis of different groups of animals. Our winner is the long jump, giving the visitors the possibility to try to overjump good athlets from the animal world, such as human flea, European tree frog, rabbit and others. Some new didactic tools were developed to work with schools, like magnet boards to place the typical wetland species into their habitats, animated presentation of waders and wildfowl feeding, and the models of creation and restoration of the nature reserve. The latter are also to be used by visually impaired visitors. Typical trees and bushes along the trails have been marked with their names for easy identification.

Stakeholders in action – financial support by the Port of Koper

With the help of the nature reserve stakeholders, the project is also reaching new horizons in innovative management and good relations with the local environment. The stakeholders are coming from all four crucial sectors of the society, thus public and business sectors, civil society and academia, and form the Joint Task Force together with the protected area staff. Part of our pilot action was devoted to the liaison work with crucial stakeholders, in particular the local municipality, port and transport infrastructure responsibles. 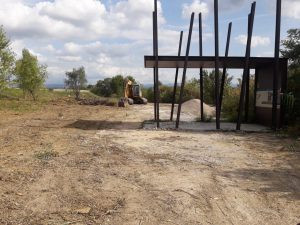 With the financial support of Port of Koper we managed to carry out the works to improve the conditions in the south-western part of the nature reserve, where the habitats bordering the port and city of Koper also neutralize the negative urban and visitation impacts. By removing the shrubs, consisting mainly of invasive plant species, we started the creation of new habitat type – sub-Mediterranean Illyrian meadow on flysch – and at the same time, gave the area more visibility for easier control. Decorative Spanish broom (Spartium junceum) was planted on the edges of the area and roadblock mounted at the entrance to the walking trail to prevent the access with the vehicles. This activity shows the real importance of the good long-term co-operation with the nature reserve stakeholders: additional funding of 25,000 euros by the Port gave us the opportunity to enhance the Pilot action over the original project budget, minimise the distrubance, improve the ecosystem with a new habitat type and at the same time, improve the ecosystem services of the nature reserve also in this area, based on its esthetic and educational functions. 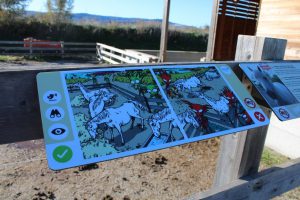